Living through the deadly horrible times of the Great Depression which occurred between the wars, growing up in Christchurch New Zealand which was the departure point (actually it’s Port Lyttelton) for many an Antarctic endeavor, led inevitably to an interest in polar exploration. This, in spite of being conscripted for a short time into the N.Z. forces at the age of 18-19 to repel the Nazi and the Japanese attempts to take over the world.

Concurrent with the excitement of a potential invasion of New Zealand, which, of course, did not eventuate even though it was close, was my first job. At the same time was “fire watching.” Yes, we really had nightly fire-watching in remote Christchurch N.Z. To much of the populace this seemed a needless burden on an already stressed country, but not to the authorities who we later learned were in receipt of top secret information straight, one assumes, from Churchill’s mouth. At this time Sir E. Hillary, who will of course feature in this blog, was in the Air Force in the Pacific helping to prevent this and hunting crocodiles in his spare time.

It is essential to relate all this to show how I ever got to Antarctica for, being just interested meant that one merely took one’s place with thousands of other young men. In those days there was no thought of young women ever going, a bit like going to Mars now – remote and incredible. But I anticipate things a bit. In those days school leaving was automatically followed by military service for boys – no ifs or buts – you did it more or less straight from school. But I got a job straight from school because I was a year younger and had enrolled part-time at University.

My job was at an almost unknown establishment known as the “Magnetic Observatory” in Christchurch. This was part of the old D.S.I.R. (Dept. of Scientific Industrial Research) led, in those times, by Dr. (later Sir) Ernest Marsden. Ernie Marsden was quite a character with quite a history. It was he who, together with the better known Geiger – yes the Geiger of the counter – was discovered, by bombarding gold atoms with alpha particles, that the atom was largely empty space. Well the story of how this was done under the guidance of the great Nobel prize winner Ernest Rutherford has often been told so I won’t promise a future blog! Ernest was a popular name then – we have already met three in this short blog.

Well, here am I a junior on the staff of the “Magnetic Observatory” Christchurch, a place with observed and recorded changes in the earth’s magnetic field. To the uninitiated that’s the field or force, if you like, that controls a magnetic compass and causes it to point to magnetic north and not the geographical north. Incidently because this magnetic declination, or “variation” changes in both space and time it often causes great confusion to amateur navigators.

In times before the days of satellites, and exact modern navigation systems, a good knowledge of the earth’s magnetic field was quite essential for decent navigation so the work was regarded with some importance especially as there was a war on and the Americans were unofficially reported to be forever getting lost in the Pacific!

As well as geomagnetism “my” little place also contributed to meteorology (that’s weather) & seismology (that’s earthquakes) so, as well as the great Sir Ernest, I also got to meet people like George Eiby (of seismology) and Richie Simmers (of meteorology) while still a part time undergraduate. 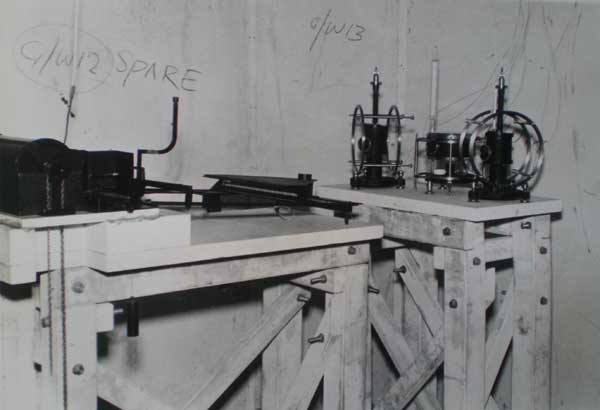 Magnetometer at Scott Base similar to those at Christchurch