The first women in Antarctica, and more tales

In those days women never, or almost never got to Antarctica and certainly there were none with Scott, Shackelton, Byrd, Amundsen, etc. But I believe one or two may have crossed the Antarctic circle in the very earli days perhaps with whalers or men like Balleny. Anyway on the 15th Oct. 1957 two women air hostesses arrived at McMurdo or, to give it its official name United States Naval Air Facility McMurdo Sound Antarctica. This in spite of Rear Admiral George J. Dufek’s ruling that so long as he was in charge of the place there would be no women there. Now, of course, women are always there.

Well now, how these two managed it is a long story and not now very clear in my memory. It seemed that the U.S. had an aircraft mishap a long way away – that is not actually in Antarctica, and were short of transport to fly summer people to McMurdo so, being in the USA, they simply hired a PAN AM long range passenger aeroplane to do the job. Now, my memory & interpretation of the facts is that according to the union rules the aircraft had to have a full crew to be allowed to fly, so what happened? The crew included two air hostesses and they came with it on the 8 hour flight from Christchurch New Zealand and it was all outside of Admiral Dufek’s jurisdiction. In those days there was a lot of contact between us at Scott Base and the Yanks at McMurdo, just 3 km away, so we certainly knew all about the 2 girls who were expected. In fact I have a record in my diary of their names!

Miss Patricia Hepinstall and Miss Ruth Kelly said to be blonde! But in full Antarctic clovver who would know & even then women changed their hair colour like they changed their shoes. These, then, are the names of te first women to be so close to the South Pole. Now, 50 years on they will be in their 70’s at least, maybe with great-grandchildren. It would be interesting to hear from them.

Anyway a big welcome was organized for them even if Admiral Dufek gave it all a thumbs down, and we at Scott were included. My notes of the occasion show that it included a dog team race between sledges of N.Z. Scott Base and the U.S. McMurdo Base. And there was a beard judging competition with the girls as judges. Into this competition I was persuaded to enter. We all expected that the prizes would at least be kisses from the girls but it was left to them to decide andthey said that the winners could escort them back to the aircraft. Quite a letdown. The only winner from Scott was our Wally Tarr, an aircraft mechanic, and it’s my guess that he would not have been keen to go all the way back to the airstrip. It was cold outside, around -30 degrees centgrade. For myself, my magnetometers beckoned and I had to return home for the 12 hour proper change on the recorders.

At this McMurdo party I remember seeing old polar explorer Sir Hubert Wilkins. Well, Wally Tarr had to endure a lot of off-colour remarks about his beard which was judged to be the most bushy. People asked things like “Did she feel it? The beard I mean!” 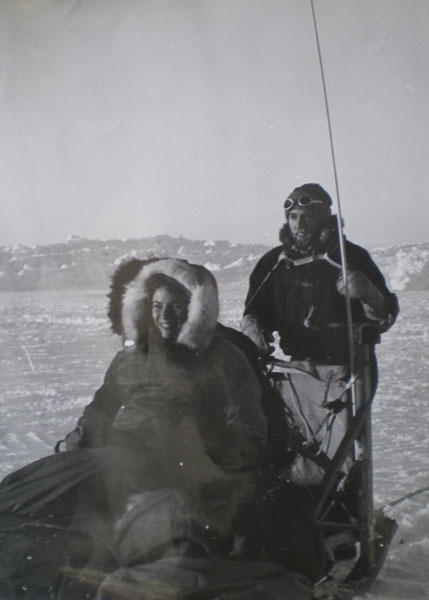 Here is a photo of our Neil Sandford driving a sledge pulled by a dog team with one of the girls a passenger. Neil was in charge of radio propagation research which to you ignuramuses was basically a sort of radar of the extreme upper atmosphere called by scientists, the ionosphere. His work enabled him to organise his day so that, when his gear was operating properly, he could have a lot of time off. Lucky him – I had to be on deck every 12 hours at least. This was definitely difficult at times. In fact it had led to me disobeying Ed’s firm instruction that in the polar winter you didn’t go on your own between the two bases. Buck, our cook, also went on his own at times. If the weather was clear & you knew the route well – carried a torch (flashlight) – it was not really dangerous, just v.cold. Anyway we did it and got away with it. Don’t fall in a tide crack!

As I have previously noted, because of the semi-official censorship on radio traffic one couldn’t complain to N.Z. headquarters about the allocation of duties. It was necessary to sort problems out on the spot. Sometimes this involved people with little or no actual scientific knowledge of the research one was supposed to be doing. It helped that we, at Scott, mostly, spoke the same version of English, at least more or less!

Our Doctor, George Marsh was from Shropshire but was generally regarded as a “good guy” even if he got sick himself when the base was being built. He alleged that he had dpihtheria and confined himself to bed with meals brought to him. Who among us could produce a contrary opinion? Well, he looked sick enough for a few days. Later he was, of course sort of responsible that all 23 of us kept in good health & took our vitamin pills which some did! George got the idea that I did not get any exercise. He didn’t know that I had a 12 hourly jaunt to my magnetic huts. Anyway, you couldn’t call that much so he decided I needed a “run with the dogs” during an “off duty” period. When was that? My “off duties” were taken up with helping dig out fuel drms – at least some of the winter, plus mess dties, which we all had. As well as M.D. George wasa “dog-man,” involving training them to full sledges & keeping them in good health for the summer field parties. So a “run with the dogs” was just that except that the dogs, nine of them in harness, were pilling a sledge but you ran too & did not hitch a ride on the sledge. Oh! Dear No! George’s exerise was not an easy ride.

So I went one cold “morning” in the pitch darkness in about -40. Actually it turned out to be -50.

Cutting a long story short I did survive my run with George and his dogs. By the way I had to harness some of the dogs too. With big strong huskies this is not easy especially as they soon got the message that you are new to this game so they try out anything to escape to have a go at their nearest rival dog.

Not it is sad to relate that Dr. George, who declared that I was unfit, is now dead. We were both about the same age.