Essentially an extract of a brief speech given by Vern Gerard to the Prime Minister celebrating 50 years since the return of the Endeavour to Wellington after the IGY, TAE expedition of 1956-58. 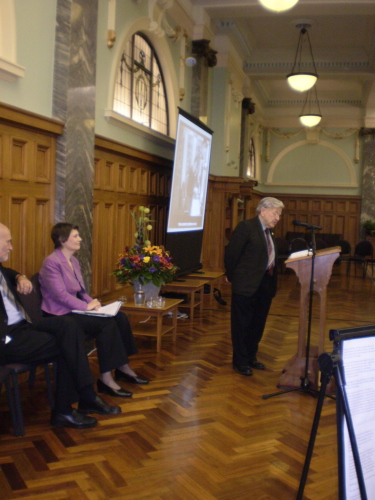 Vern Gerard speaking at Parliament in 2008 celebrating the 50th anniversary
of the return of the Endeavour to Wellington.
(Prime Minister Helen Clark is seated on the left.)

I have actually been on two Endeavours, but have not sailed on either.

The one I liked best was Cookâ€™s ship and, though I am old I am not that old, and this Endeavour was actually a modern replica of Cookâ€™s which visited Wellington some years ago. She was a very fine ship.

The Endeavour we are celebrating today was being used to transport Scott Base- the future Scott Base, to the Antarctica in 1956-57. I was actually on her for only 7 days in January 1957. This was while we were unloading the future Base.

Most NZers to staff Scott Base went South on this Endeavour because NZ was, as often, punching above her weight, and our IGY scientists and a few others could not be given room on her so the Americans, as usual, kindly helped by taking us down on the US Navy ice breaker Glacier. Icebreakers roll horribly in a bad sea and I well remember being the only one not sick.

I first saw the Endeavour to the east of Beaufort Island just north of Ross Island on 5 January 1957 when the Glacier was breaking ice for US ships. She still had a Christmas tree on her mast head. On the upper deck were most of the people we had trained with at Mt. Cook.

Scott Base was intended to be at Butter Point on the western side of McMurdo Sound; but when the Endeavour got near, it was found to be an impossible place with practicable access only by helicopter. We had two aeroplanes but no helicopter. This rather wrecked our plans, which had been quite settled on Butter Point because a preliminary party had examined it the previous year and reckoned it was alright especially for the TAE crossing party scheduled for late 1958. But actually it would have suited no one well except maybe a palaeontologist

The Ross Dependency is claimed by NZ, but it was the Americans who came to our rescue and more or less decided on Pram Point for our Base when they bulldozed a site there for us. This was a handy 3km from McMurdo â€“ an easy walk. In fact it was not a bad spot with lots of penguins around then â€“ but not now. I donâ€™t think Hillary, Miller, or Helm wanted to be so close to McMurdo, but the Base had to go somewhere.

The Antarctic summer is short â€“ it was already after the New Year and the Endeavour had on board 9 pre-fabricated huts, 2 aeroplanes, tractors, 6 diesel generators, tons of supplies, IGY scientists and Hillaryâ€™s mountaineers, etc. So everyone was quite pleased to settle for Pram Point and Scott Base is still there today 51 years after.

On 12 January 1957, after a week on the Endeavour, I left her for a tent at Pram Point and I have never seen the Endeavour since.