This is Vernon Gerard’s niece Bhex posting for her uncle.

We would like to invite everyone to drop by the launch of Dr. Gerard’s first book: With Hillary at Scott Base: A Kiwi Among the Penguins on 14 September, 2012 at the Upper Hutt City Library. 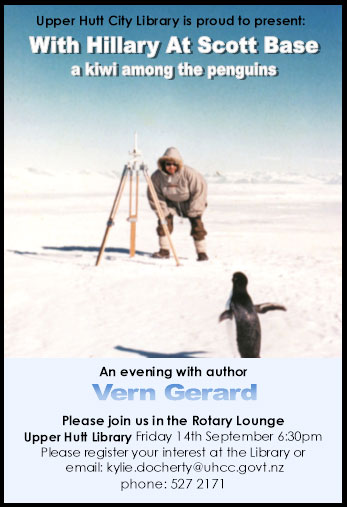 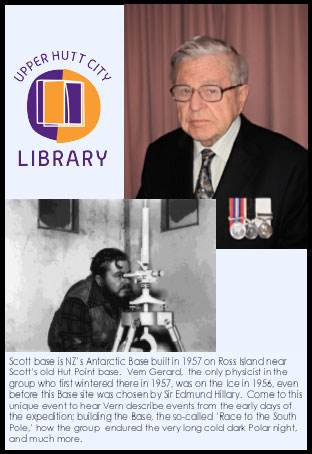 The New Zealand Antarctic Society (Inc.) has posted details on this launch, which I will reproduce here:

Vern Gerard, now 87, one of the only 6 remaining survivors and the only physicist in the TAE-IGY group led by Sir Ed has finally wrote a book entitled – With Hillary at Scott Base (A Kiwi Among the Penguins) published by Bateson Publishing Ltd.

During the launch Antarctic photos taken by Vern (which are not included in the book) will be shown on a big screen, there will be a display of few of his old Antarctic clothing, a panel display about his book, speeches, etc. Books will be made available for purchase during the event (they’re not yet on the market), and Vern will be signing them on the night.

As space is limited, thoseÊinterested to attend the event may ring up the Upper Hutt City Library (tel 5272 171) or email: kylie.docherty@uhcc.govt.nz

For any other inquiries, please feel free to contact us at vernon -dot- gerard -at- gmail -dot- com.