(Note: Vernon Gerard, author of With Hillary at Scott Base: A Kiwi Among the Penguins, and owner of the Old Antarctic Days blog, visited the Philippines recently. The following blog post was written by Vernon himself. It was digitized from his handwritten notes and uploaded by his niece,  Bhex.) 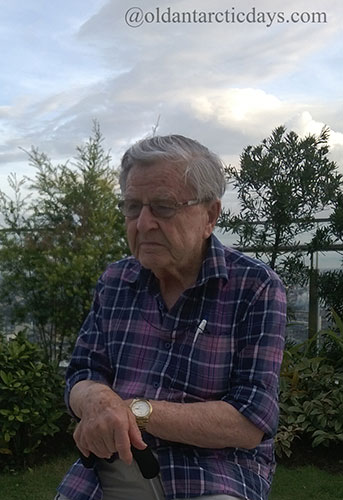 Following the Moon Landing in the 1950’s-60’s, the Orion project was conceived by boffins in the USA and Germany, although people now hate the concept of atomic energy. This backlash against all things atomic came following the A-bombs which destroyed Hiroshima and 3 days later Nagasaki too and finished WWII very suddenly.

It might have been thought that the very successful moon landing would have given space flight a great boost. But just a few years later the USA destroyed an island in the Pacific using one of the new H-bombs. People revolted against anything with a whiff of plutonium as described by the N.Z. Prime Minister David Lange to a debate at the Oxford Union.

But boffins, especially in Germany, saw the potential of the Bomb to propell a space ship to the great velocity needed to reach Mars & the asteroids suitable for landings. The idea was to simply explode a small A-bomb about every 10 seconds behind your space ship to give it the required final velocity. To us it sounds crazy, but the boffins of that era (1960’s) thought it would work. You needed an effective shock absorber behind the space ship and the development would involve tests in perhaps the Nevada desert or near the S. Pole or somewhere where there was no great objection.

After a dozen tests or even less, you do come off with a real nifty device. Atmospheric air does not impede the ship because you started off in space anyway. Of course some minor rockets would be needed for direction correction and any boffin can think up all sorts of objections to the scheme. Just get thinking and do it! With all the US War II dollars and Plutonium (Pu) the US (and others) just dropped all the ideas. But sometime it will be revived.